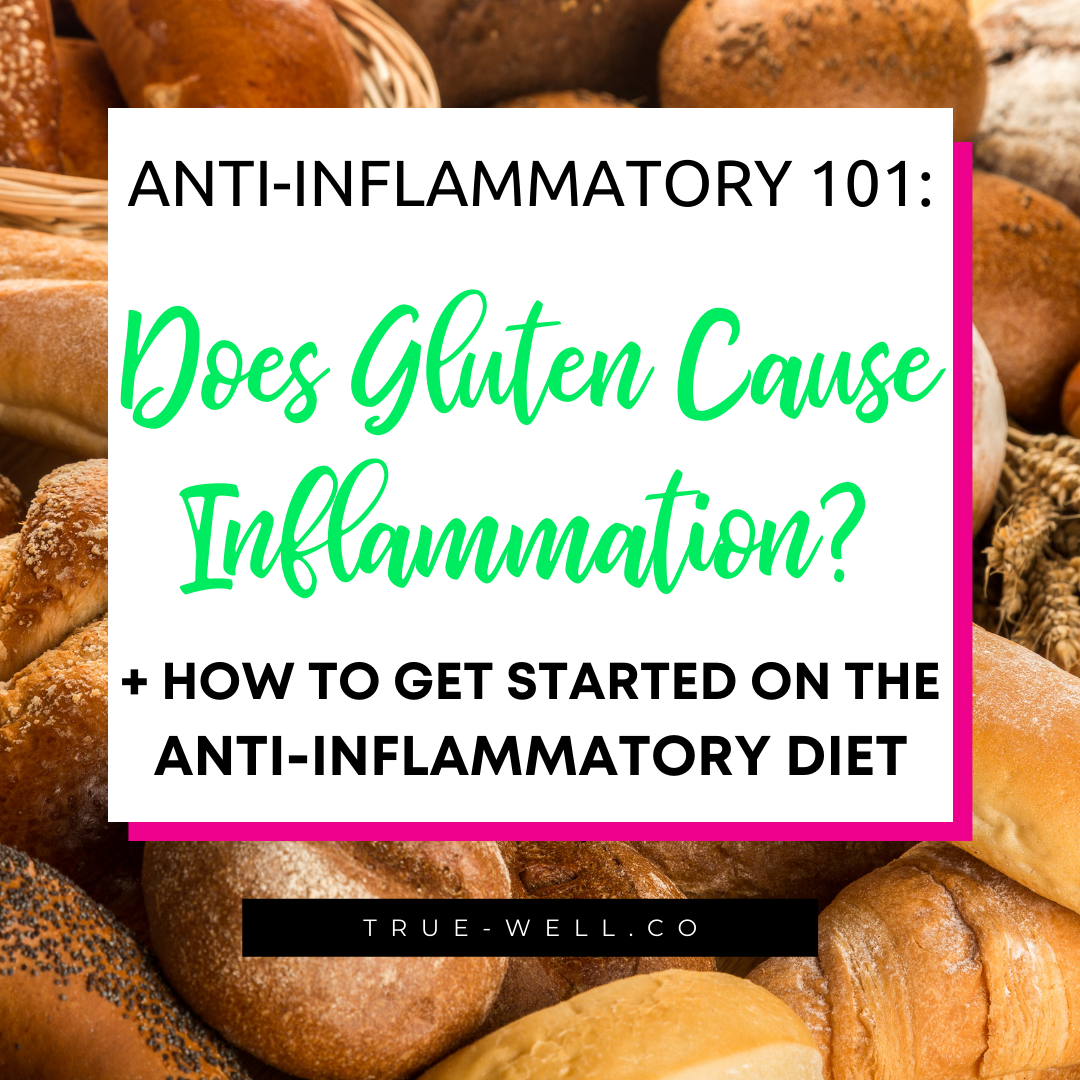 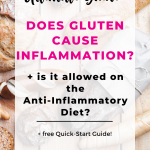 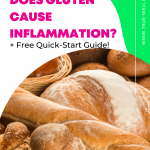 Go to any restaurant these days and you’ll find that most menus now have ‘gluten-free’ as an option, testifying to the surge in popularity of going gluten-free. When it comes to an Anti-Inflammatory Diet and Lifestyle, however, gluten consumption can be an even more controversial topic, prompting the question: “Does gluten cause inflammation?”

Gluten is a protein that is present in certain grains, most notably wheat. Each molecule is comprised of two components: glutenin and gliadin (more on those later.)

Gluten has been shown to be a key ingredient for breads as well as bakery goods because it helps to maintain stability as it has a certain ‘stretchy’ quality to it.

Gluten is not present in all grains. The grains that contain gluten are:

Cross-contamination is when a food doesn’t inherently contain gluten (like wheat, barley, and rye), but the manufacturing company where it is packaged or processed could also process gluten-containing foods.

For this reason, people that must strictly avoid gluten must read the food label to confirm that the facility it was processed at does not also process gluten-containing foods.

Foods that frequently have cross-contamination or cross-contact possibilities are:

Other products that regularly contain gluten

Many packaged products contain gluten, and it takes a lot of investigating to find this out.

When you look at how gluten affects people who suffer with celiac disease and are gluten sensitive you can see if this also impacts other people. Studies have shown that gluten triggers zonulin (a protein found in the small intestine that acts as a gateway to the intestinal barrier lining), whether in people who have celiac, non-celiac gluten sensitivity, or neither of these conditions.

When the intestinal lining is breached, it lets in harmful bacteria and food proteins, triggering the immune system.

What this means is that gluten is causing an inflammatory response in everyone, but there may be no visible or tangible symptoms.

Why is gluten bad now but not in the past?

Many people think this is nonplausible because ‘we’ve been eating gluten for hundreds of years and this has never been a problem.’ That’s true. But back then, the grains that were grown were from traditional varieties. This is why many people who have issues on grains and gluten in the States can go to Europe and have no symptoms. The grain is different.

In the past I dove into this research, and according to Dr. William Davis, in his book Wheat Belly, this is due to the process the food industry has taken in creating a genetically modified wheat stalk that resists buckling from wind. What you see in the grocery store is a hybrid of a hybrid of a hybrid that has essentially altered the glutenin to gliadin ratio inside the gluten protein.

Does gluten cause leaky gut?

Leaky gut is a fairly new term that refers to the intestinal wall cells being breached because of increased permeability. When this happens, immune cells are triggered and food sensitivities and food allergies can develop. It is well known that a leaky gut can cause intestinal inflammation for those with celiac disease.

But for those that aren’t diagnosed, increased intestinal permeability and damage can still be caused in the gut. This means gluten can be problematic for everyone, potentially.

This is usually caused by a molecule called zonulin, and science shows us that zonulin is the culprit in triggering that intestinal permeability.

Leaky gut is, in and of itself, problematic because it’s been shown to be the precursor to food allergies and sensitivities (which cause inflammation) as well as autoimmune disease.

Celiac disease is a severe autoimmune condition in which your small intestine and villi are damaged, which doesn’t allow you to absorb nutrients from food due to your immune system’s reaction to gluten.

Gluten causes inflammation damage to the small intestine in those with celiac disease. Celiac disease can also be triggered by rye, barley, and some oats in certain people (the oats can be contaminated by gluten-containing grains in the manufacturing process.)

The only treatment for celiac disease is a lifelong gluten-free diet. Even if someone eats gluten in a modest quantity severe intestinal damage can occur if you have celiac disease.

How celiac disease is diagnosed

Celiac disease is usually suspected when certain markers come back in blood tests. Many GI specialists are now also including a DNA blood test that show the gene responsible for celiac probability.

It is widely believed that if the gene is positive, celiac is suspected and a GI scope is recommended to obtain a biopsy of the intestinal tract to confirm celiac.

If the gene is negative, celiac disease is probably not present, but it does not rule out non-celiac gluten sensitivity.

Signs and symptoms of celiac disease

Non-celiac gluten sensitivity is when celiac disease is not present, but gluten inflammation is still occurring, causing symptoms.

The resulting chronic inflammation can still interrupt the body’s ability to absorb essential nutrients, even when celiac disease is not diagnosed.

How gluten sensitivity or gluten intolerance is diagnosed

When your physician orders blood tests, they will be looking for a certain marker for celiac. If this comes back negative, (and especially if the DNA marker is negative) they can also look for antibodies to gliadin. If those are present, it usually indicates non celiac gluten sensitivity, sometimes refered to as gluten intolerance.

The best way to confirm this for yourself, however, is an elimination diet.

You may notice similar symptoms to celiac disease, like:

There is no such thing as a gluten allergy, but you can have antibodies to gliadin, which is present in gluten. Many people do find themselves allergic to specific grains– whether they contain gluten or not.

Testing for specific grains can be done at an allergist’s office. There are two types of tests normally done: blood tests (which would show a reaction from the immune system) and/or skin prick tests.

Depending on who you ask, there are many opinions on which of the two tests are accurate. Some believe that neither are totally accurate. (I can attest to this personally as we’ve been through the gamut of these for myself and two of my daughters.)

Symptoms and signs of allergic reaction to grains

Should I eliminate gluten in an anti-inflammatory diet?

I personally think that if you have no underlying conditions, don’t need to lose weight, and are simply on an anti-inflammatory diet for good health and disease prevention, then you may be ok with gluten in your diet. Just keep in mind that the Anti-Inflammatory Diet only allows whole grains in their whole or cracked forms.

If you have certain conditions, I recommend a gluten-free diet.

Conditions that would warrant eliminating gluten

*The Arthritis Foundation has a stance currently that whole grains are part of a healthy diet, even for those with arthritis. However, these standards may soon change based on new recommendations of what’s called the ITIS Diet, which eliminates gluten and dairy.

If you don’t know, but suspect an allergy or sensitivity, an elimination diet is always the best way to be sure. My best advice for that is to be VIGILANT and DETAILED and use a food journal.

An elimination diet is when you eliminate certain food groups for approximately 21 days then add foods back systematically one at a time to see if you react to them.

How to start a gluten-free lifestyle

Obviously, the first step is to eliminate gluten-containing foods. Start with the list at the start of this article.

Determine if you need to eliminate ALL grains

Not to be Captain Obvious, but a gluten-free diet can be really hard. That being said, I recommend testing (through an elimination diet preferably) to see if you react to ALL grains, or just a few.

Whole grains can be a really key part of reducing inflammation because of the fiber and resistant starches. So if you can include some that are gluten-free, that would be ideal.

For example, if you are determined to have a wheat allergy or intolerance, you can eliminate wheat but possibly still have other whole grains listed above.

Be vigilant depending on the severity of conditions and symptoms

One thing many doctors recommend is varying your vigilance on your severity of symptoms. Obviously, we want to eliminate them altogether, but ultimately you’ll have to be the judge of what you can tolerate. I say this because it can be exhausting being the food police.

If you have been diagnosed with celiac disease, for the love of Pete– don’t cheat! Stay away from gluten because it’s damaging your body every time you eat it.

Studies have shown that those with conditions that warrant a gluten-free diet are more likely to react to dairy products as well, whether from lactose intolerance, an allergy or just a sensitivity.

All in all, I believe gluten-containing grains could be ok in an Anti-Inflammatory Diet if there are no underlying health concerns and you’ve proven with an elimination diet that you don’t have reactions to gluten. However, seeing the data on gluten and the effect it has on the gut lining of people even without celiac or intolerance has personally veered me away from gluten.

A good read on the subject (of specifically wheat and how modern-day gluten reacts in the body) is the book Wheat Belly by Dr. William Davis. It explains the process of hybridization and how it’s affected the gluten protein in modern wheat, and the effect it has on the human gut.

Laura is a Nutrition Specialist and Certified Health Coach with a Master of Science in Nutrition. Her goal is to help working moms reduce inflammation, balance blood sugar, and regain natural energy with her CHEAT Codes to Wellness framework. View all posts by Laura Brigance, MS, CHC